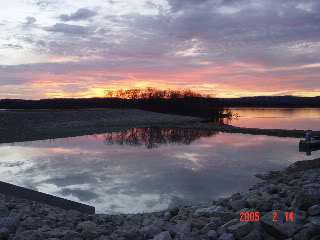 I had planned to write at least a couple of entries on this Ozarks getaway.  But life intervened.  First, I got sick.  In fact, the entire family got sick, to the extent that you would have thought that there was a competition to see which of us would cough up a lung first.  Mornings around here have been a veritable symphony of hacking that is only just finally winding down.

But it wasn’t the flu or anything serious.  Just a hard core cold making the rounds and a general malaise that made me feel like doing very little except lying around reading and looking forward to my next Sudafed.  Fortunately, I didn’t have to.  Do much, that is.

Next, our internet connection started getting weird, no doubt related to the fact that the condo’s connective wire was loosening.  You can only be tripped over by a seven-year-old a certain number of times before your connection starts to go.  So the knowledge that while I was writing a post, the internet connection might suddenly disappear, as it has been doing in the last few days, was a powerful disincentive to write.  Finally, I just decided to write a simple entry to get back in the game, and paste it in.  Ergo. . .

Reading.  I have done a lot of reading, which I was hoping for, and a lot of “not answering the phone,” because it doesn’t ring!  Whee!!!!

We have holed up in a nice condo with two story windows that look out on Table Rock lake.  We’ve read (more on that below), watched more tv than usual (Enchanted, the Parent Trap, Spiderman, Garfield: A Tale of Two Kitties (sigh) and HGTV out the wazoo), and spent way too much time on the computer when the connection was good (me on Ebay and the kids on Yugioh Cardmaker).

I have gorged on shelter magazines and finished Love and Consequences and Finding Your Child’s Strengths.  Love and Consequences, a is gang “memoir” that managed to make it to the Faulkner County library in spite of the fact that Penguin pulled the hardcover from the shelves, a la James Frey, just days after it was published.  Turns out it is utterly fictional.  Not just a few “characters combined here and there, some names and places changed,” but entirely made up.  Check out the controversy here.

Conclusion:  It stinks in any genre, fiction or non.  I can’t believe it got published.  The writing is horrible.  Nuf said.

Finding Your Child’s Strengths.  Pretty good if you’re interested in the material.  Check out the strengths movement here.

Now I’m heavy into the Hermione Lee’s Edith Wharton biography which is living up to expectations—well done, Ms. Lee! (she’s British).  It is definitely the best bio yet.   But here’s the issue.  It’s 750 pages of dense stuff.  Normally this wouldn’t be a problem if I hadn’t already read a bio of Wharton, during what could be called my “Edith Wharton period,” some years ago.  I must confess I am someone who is spurred ahead by suspense and new information.  Which is rather subtle when you’ve already got a pretty good idea of the author’s life.  But on page 50, I’m not giving up yet!

I’ll end with an update on the crusade to save Ms. Wharton’s historic house, The Mount.  They got a $30,000 grant which has meant a reprieve until April 24.  They have raised $550,000 ish on their way to 3 million dollars.  Spread the word, people.  This property desperately needs saving.

Till we’re back in Conway tomorrow,